Anatomy of a Dog 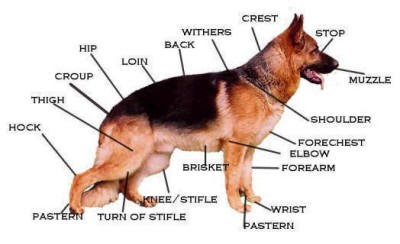 The many terms dog fanciers are familiar with:
• Occiput - the highest point of the skull at the back of the head; prominent on some dogs.
• Forehead - the portion of the head from the stop and eyebrows to the back point of the skull.
• Eyes - most often brown.
• Dogs have eyebrows, or simply brows, just like humans.
• Whiskers provide some sensory feeling.
• Flews is just a fancy word for a dog’s lips.
• A dog’s cheek is the skin along the sides of the muzzle.
• Muzzle (foreface) is comprised of the upper and lower jaws.
• Throat is beneath the jaws.
• Stop is an indentation (sometimes nonexistent) between the muzzle and the forehead.
• Neck - runs from the head to the shoulders.
• Nape of the neck is where the neck joins the base of the skull in the back of the head.
• Crest starts at the nape and ends at the withers.
• Withers are the top point of the shoulders; highest point along the dog’s back.
• Shoulder - top section of the foreleg from the withers to the elbow.
• The back runs from the point of the shoulders to end of the rib cage. The term back is sometimes used to describe the back and the loin.
• Prosternum is the top of the sternum, a bone that ties the rib cage together.
• Chest is the entire rib cage of the dog.
• Brisket - term used to refer to the sternum. In some breed  term refers to the entire thorax.
• Loin is the back between the end of the rib cage and the beginning of the pelvic bone.
• Flank refers to the side of the dog between the end of the chest and the rear leg.
• The upper arm on the foreleg is right below the shoulder and is comprised of the humerus bone, which is similar to the one found in an upper arm. It ends at the elbow.
• Elbow is the first joint in the dog’s leg located just below the chest on the back of the foreleg.
• The long bone that runs after the elbow on the foreleg is the forearm,  comprised of the ulna and radius. The forearm may have feathering on the back.
• Thigh bone is connected to the pelvis at the hip joint. Hip dysplasia is an abnormal formation of the hip socket that, in its more severe form, can eventually cause crippling lameness and painful arthritis of the joints.
• The upper thigh is the part of the dog’s leg situated above the knee on the hind leg.
• Stifle or knee is the joint that sits on the front of the hind leg in line with the abdomen.
• Abdomen is the underside of the dog from the end of its rib cage to its tail.
• The wrist is the lower joint below the elbow on the foreleg.
• Pastern is the foot of a dog. Sometimes called the carpals, pasterns are equivalent to the bones in your hands and feet —not counting fingers and toes — and dogs have them in both forelegs and hind legs.
• A dog’s toes are equivalent to fingers and toes.
• The toenails or claws on the end of each toe are actually incorporated with part of the last bone of the toes.
• Dogs have a foot or paw at the end of each leg, called the forefoot or hind foot depending on whether it’s front or back. The paw comes with nails (sometimes called claws), paw pads, and usually dewclaws.
• Dewclaws are vestiges of thumbs, more or less useless appendages.
• On the underside of the foot are several pads, including one main pad (communal pad) and a pad under each toe, for a total of five pads. You can find stopper pads behind the wrist on a dog’s forelegs.
• The lower thigh is the part of the hind leg beneath the knee to the hock - a joint like an ankle. Some dogs have feathering along the back of their lower thighs and hocks.
• The rump (or croup) is the rear end; where the pelvis bone is.