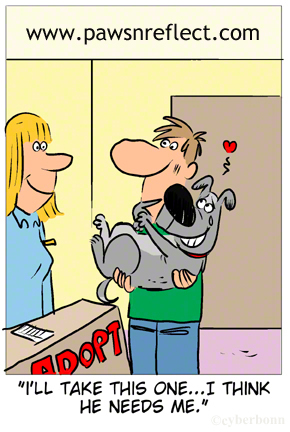 There are many mythconceptions about the quality of animals found in rescue shelters. The stigma that shelter pets have been stuck with for many years is that they are damaged goods.

Myth 1: Shelter pets are obviously not good pets, or else their original owners wouldn't have gotten rid of them.

Animals are brought to shelters for a large variety of reasons including:

1. Their owners have passed away.
2. An irresponsible owner didn't get their pets spayed or neutered and found themselves with a litter of babies they could not keep or want.
3. The animal's owners were abusive so the authorities have removed the pet from the harmful environment.
4. An animal was purchased or adopted by someone who did not take into consideration all of the responsibility that caring for that pet would entail (such as someone who adopts a pet in an apartment complex that does not allow animals and subsequently forced to get rid of the pet).

Myth 3: You never know what you're getting with shelter pets.
It’s true that the medical history and temperament of an animal adopted from a rescue shelter is questionable, but, it’s no different than an animal you can buy from a pet store - unless you purchase a pedigree – and even then, there are no guarantees.

Myth 4: All animals in rescue shelters are sickly or unhealthy.
It’s certainly possible that a pet adopted from a shelter may have medical problems, however the majority of the animals that are adopted from rescues or shelters are perfectly healthy - and just need a good home. You’re more likely to get an honest answer about an animal's medical problems from a shelter volunteer - who is clearly there because they care about the animals, as opposed to a pet store owner or breeder that is only it in for the money.
on July 22, 2018