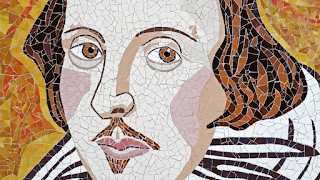 DOGS have long been used as metaphors to describe determination, loyalty, as-well-as tenacity.

WILLIAM SHAKESPEARE too uses these descriptions, but also describes DOGS in relation to their role in war and fighting, and his writings have formed a key part of our study of the English language, theatre and the arts, and Tudor history.

Julius Caesar is considered one of Shakespeare’s tragedies and in its lines can be found arguably one of the most famous quotes about DOG symbolism. In Act 3, Scene 1, the play’s namesake has just been murdered when Mark Antony enters. After the others have left him, he speaks a large soliloquy ending with the lines:

… All pity choked with custom of fell deeds;

And Caesar’s spirit, ranging for revenge,

With Ate by his side come hot from hell,

Shall in these confines with a monarch’s voice

Cry Havoc and let slip the dogs of war,

That this foul deed shall smell above the earth

With carrion men groaning for burial.

Here, DOGS are used as a metaphor for mindless and indiscriminate killers who will do simply as their masters order. They also represent those who seek revenge despite the violence that will prevail as a consequence.