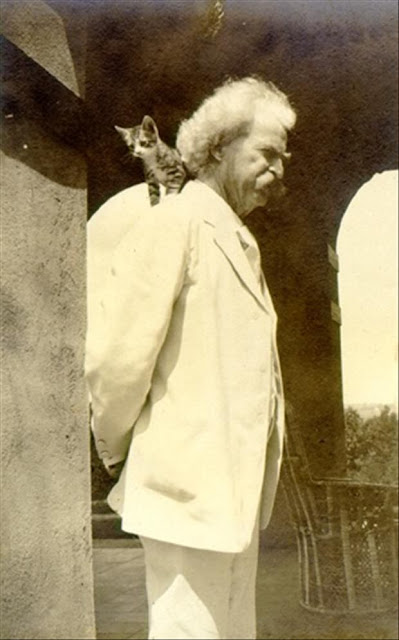 "Cats are loose in their morals, but not consciously so. Man, in his descent from the cat, has brought the cat’s looseness with him but has left the unconsciousness behind–the saving grace which excuses the cat. The cat is innocent, man is not."

"The cat plays with the frightened mouse; but she has this excuse, that she does not know that the mouse is suffering. The cat is moderate–unhumanly moderate: she only scares the mouse, she does not hurt it; she doesn’t dig out its eyes, or tear off its skin, or drive splinters under its nails–man-fashion; when she is done playing with it she makes a sudden meal of it and puts it out of its trouble. Man is the Cruel Animal. He alone is of that distinction."

The 2 excerpts above are from: The Damned Human Race by Mark Twain

PLEASE NOTE: You will find spelling mistakes in this essay.
"As I have said before, I never had any large respect for good spelling."
- from the Autobiography of Mark Twain 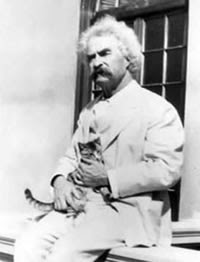 Mark Twain LOVED CATS. He once said, “I simply can't resist a cat, particularly a purring one. They are the cleanest, cunningest, and most intelligent things I know, outside of the girl you love, of course.” ... Twain wrote: “When a man loves cats, I am his friend and comrade, without further introduction.”

What do a cat, a rooster, and an anaconda have in common? Twain suggests that man is a descendant of all these animals, as he agrees with Darwin that every animal has evolved from the same starting point. However, Twain suggests that Darwin wasn’t exactly correct in his claims of the human species being more evolved than other animal species’. Although men tend to believe that they have evolved from what Twain satirically calls the “lower species” of animals, Twain argues otherwise. Men harbor avarice, cruelty, and a knack for destruction; traits that Twain argues are present in no other animal. Therefore, it is possible to conclude that the human species is actually a devolution of other animals, which is precisely what Twain argues in his satirical essay, “The Damned Human Race.” - from: ngordsatire - a wordpress blog . 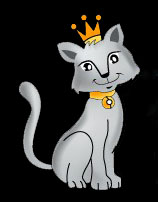 Hope you found this pawsatively illuminating.
Thank you for visiting.
on August 04, 2019